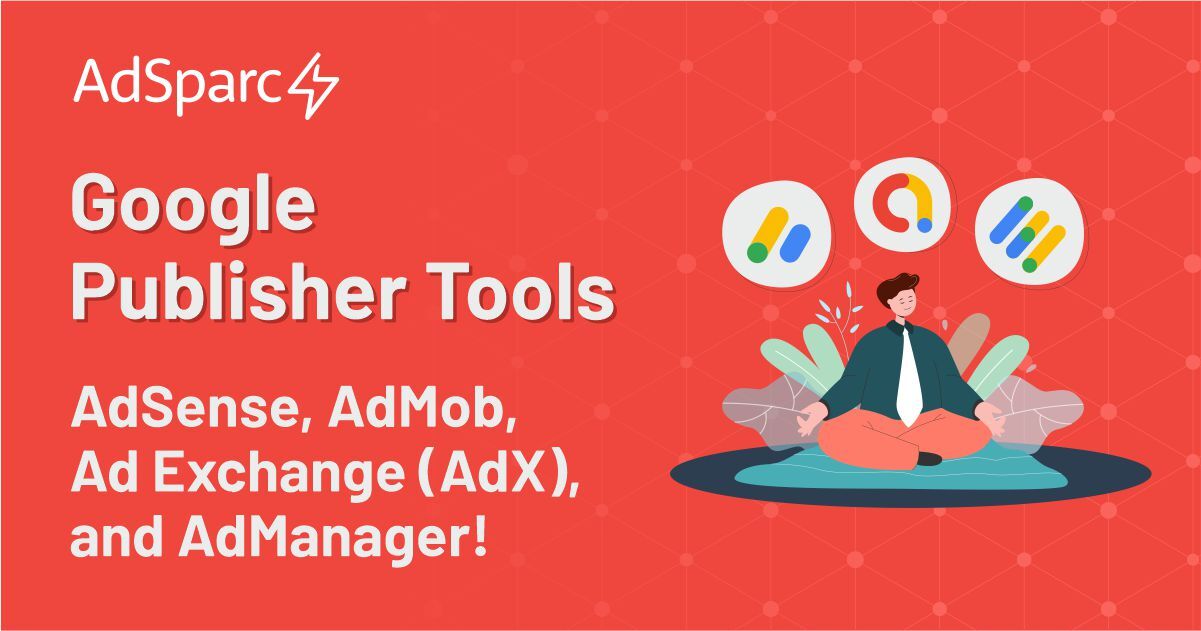 Today’s booming programmatic world is as broad as it’s long. Google always beats the clock and launches new Google publisher tools for your websites or apps. However, multiple options can lead to numerous misconceptions and underutilization. Let’s debunk some common myths and misconceptions around Google’s publisher solution products.

Shall we start with the first myth? “Ad Manager serves higher quality ads,” that’s not true! Google AdSense, AdMob, and Ad Manager publishers have access to the same premium Authorised Buyers. Publishers can serve high-quality ads from all three platforms.

The second highly prevailing myth is “Google ad manager 360 is a premium version of AdSense”, again, not true! GAM is an entirely different product from AdSense and AdMob. GAM is a unified platform with granular inventory controls that allow publishers to manage direct sales, third-party networks, and programmatic demand. Google ad manager 360 is the premium version of Google Ad Manager (GAM).

Google offers publishers a comprehensive suite of Google publisher tools designed to help them get the most out of their website. The plethora includes tools to help them monetize the content to measure and improve their website’s performance. Ultimately, you want to get more bounce for the ounce as a publisher, right?

Here’s our blog that will give you a clear explanation of each Google publisher tool and provide you a quick guide on how to get the most out of your monetization setup.

What is Google Ad Manager?

Google Ad Manager, a.k.a. GAM, is a publisher monetization platform from Google. It is part ad-server and part Supply Side Platform (SSP), giving publishers a complete solo system to administer ad supply from direct sales, third-party ad exchanges, and Google’s programmatic demand. GAM is a comprehensive platform to thrive ad revenue and safeguard your brand wherever netizens are watching, playing, or engaging. It is a cloud solution; hence, no software download or installation process is required. Everything is managed via the online interface at https://admanager.google.com/home/ 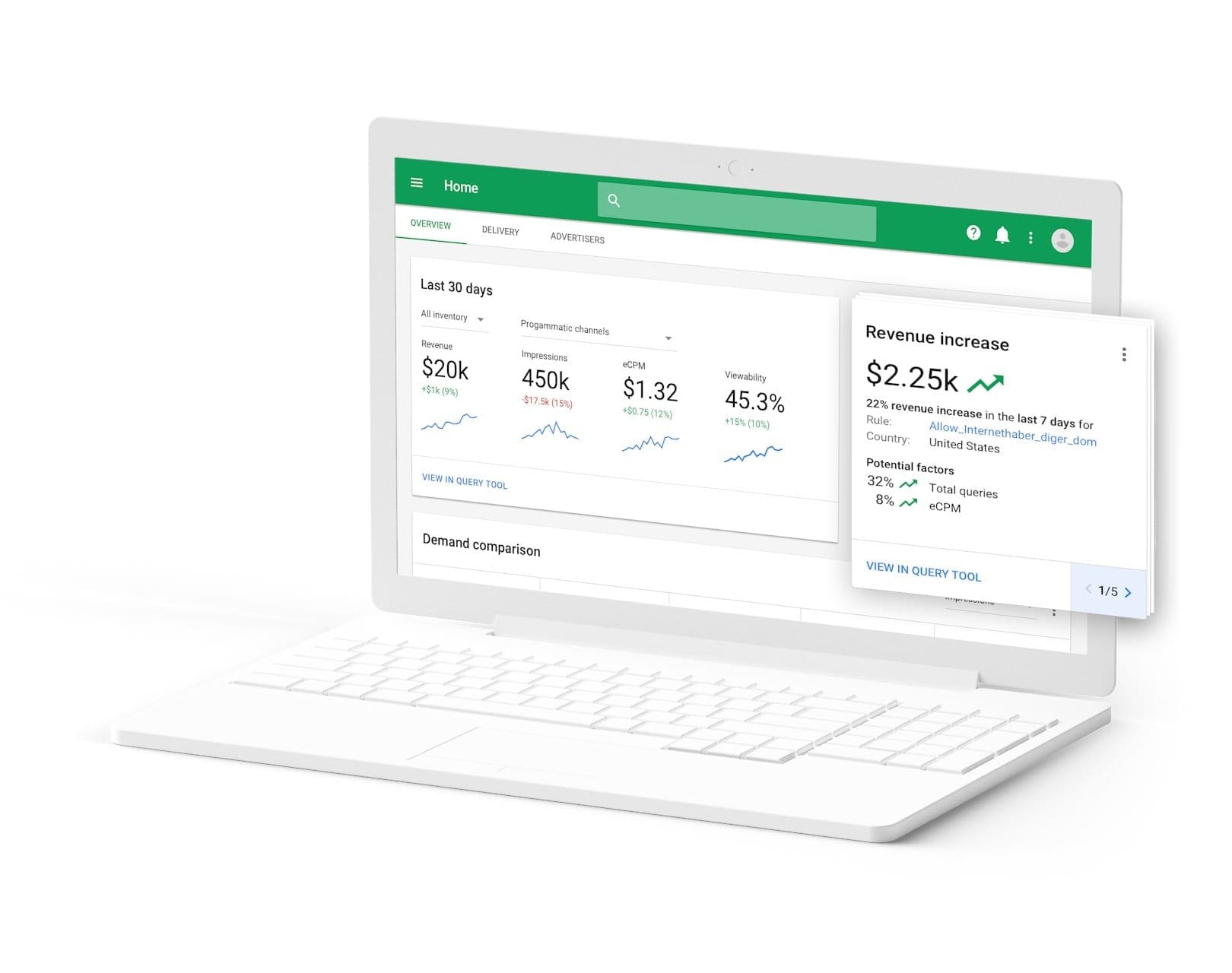 Google Ad Manager amalgamates two distinct products: DoubleClick for Publishers (the ad server) and the DoubleClick Ad Exchange (SSP). These two products were merged under the new name in 2018. While it is often seen as the Google AdSense alternative, GAM executes a lot more functions than just being an ad network like AdSense or treated as a Google AdSense replacement. If you are a newbie, you should check out the AdManager tutorial and get an overview of Ad Manager. Admanager tutorial will guide you to understand better about the functionality of Admanager. GAM provides granular controls and supports multiple ad exchanges and networks, including AdSense, Ad Exchange, third-party networks, and third-party exchanges.

Ad Manager is for you if you need:

What is Google Ad Manager 360?

Here’s the overview of what these specific monthly impression thresholds look like on Google Ad Manager 360: 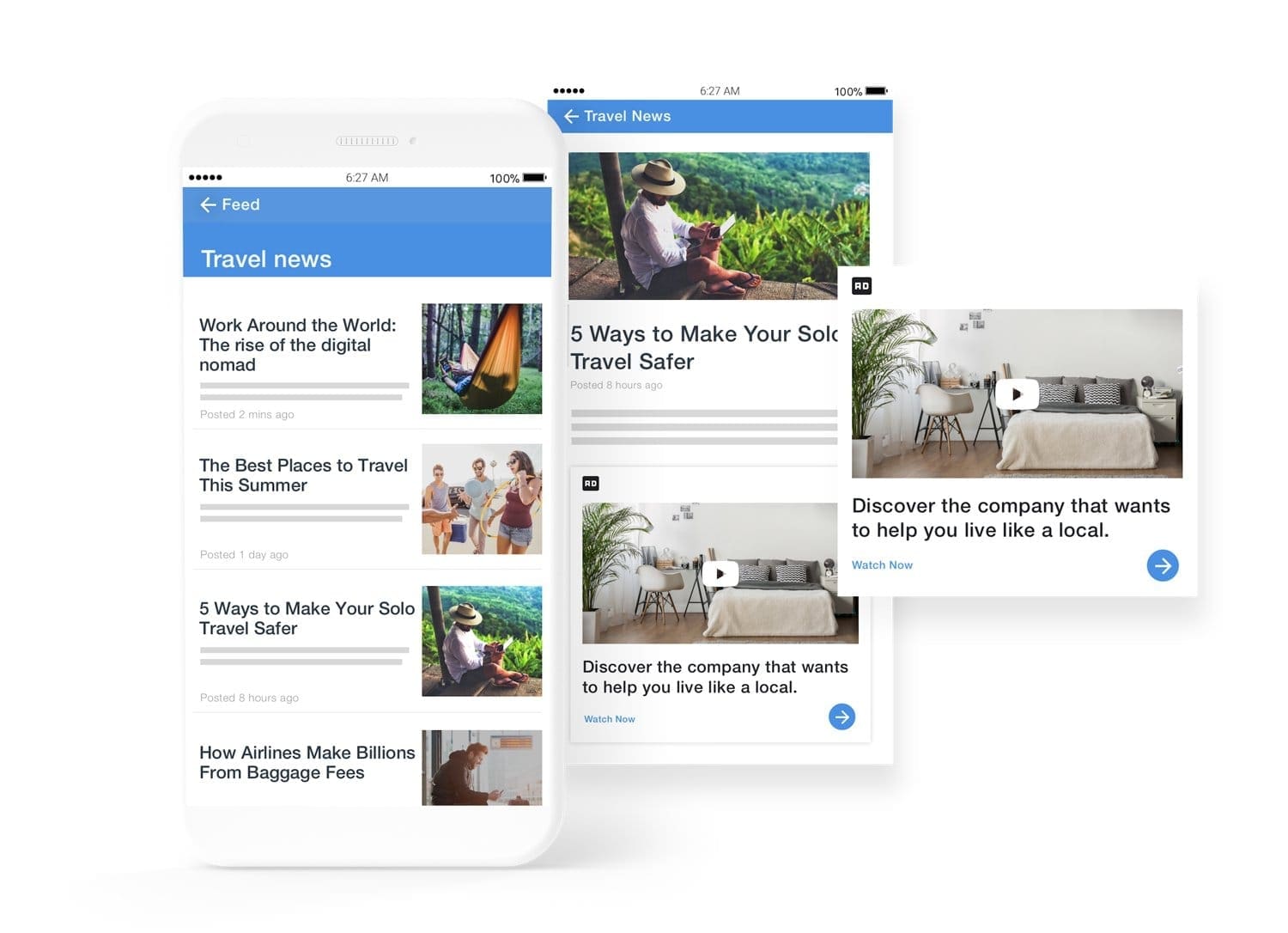 What is Google AdMob?

AdMob is an advertising platform from Google for promoting and monetizing mobile applications. AdMob practically makes it easy for mobile developers to earn money from their mobile apps with high-quality ads. In simple terms, it acts as a revenue genie to the mobile app developers. AdMob maximizes the value of every impression by combining global advertiser demand, innovative ad formats, and advanced app monetization technology. It works best by matching ads to your app based on the criteria you set. What is an AdMob alternative? Every great product has a strong contender. The same law applies to AdMob! There is an Admob alternative available, and you can check out the comparison amongst the AdMob alternatives.

By allowing publishers to control the deliverability of suitable ads to the right users at the right time, AdMob provides freedom to publishers while monetizing the app. It offers a wide range of formats:

Interstitial: Static or video ads that can appear at natural breaks or transition points, creating engaging brand experiences without disrupting the app experience 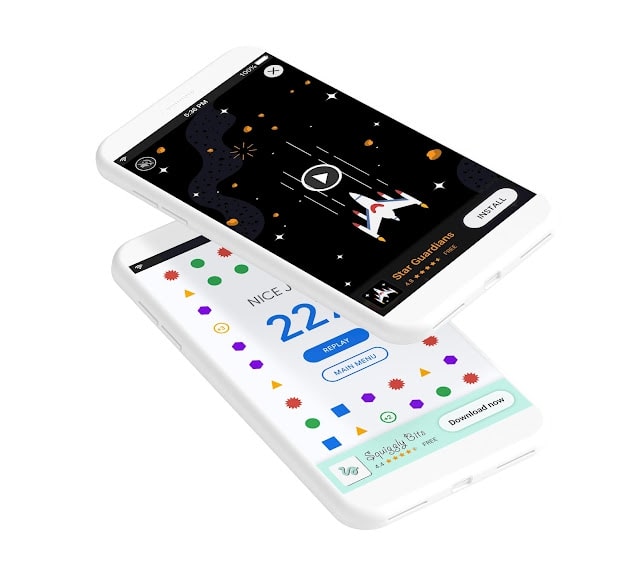 AdMob test ads: AdMob test ads are a crucial part of your app development. Testing that your ads are implemented correctly is important. Remember, during app development and testing, use demo ads or test devices to verify your implementation code without violating AdMob policy. Now, let’s talk about Admob vs AdSense!

Admob vs AdSense: One major confusion that publishers have is how AdMob is different from Google AdSense? Which one is better for monetizing mobile apps? Admob vs AdSense! Google AdSense and Google AdMob can be predominantly categorized as “Advertising” tools. Now let’s dive in and check out the contest of strength between AdMob vs AdSense here:

AdMob is for you if you need:

What is Google AdSense?

After AdMob vs AdSense, let’s jump in for more insights on Google AdSense! The expedition of nearly every web publisher on this planet starts with Google AdSense; it is “an oldie but a goodie!” It is a free ad network and was launched in the year 2003 by Google. Numerous small and medium publishers are still using Google AdSense to monetize their traffic. AdSense supports display, text, video, and interactive ad formats. It offers an excellent opportunity for web admins and site owners to monetize their traffic — every year, Google pays over $10 billion to its publishers. The simplicity of AdSense often creates the pivotal first stage in any publishers’ monetization journey 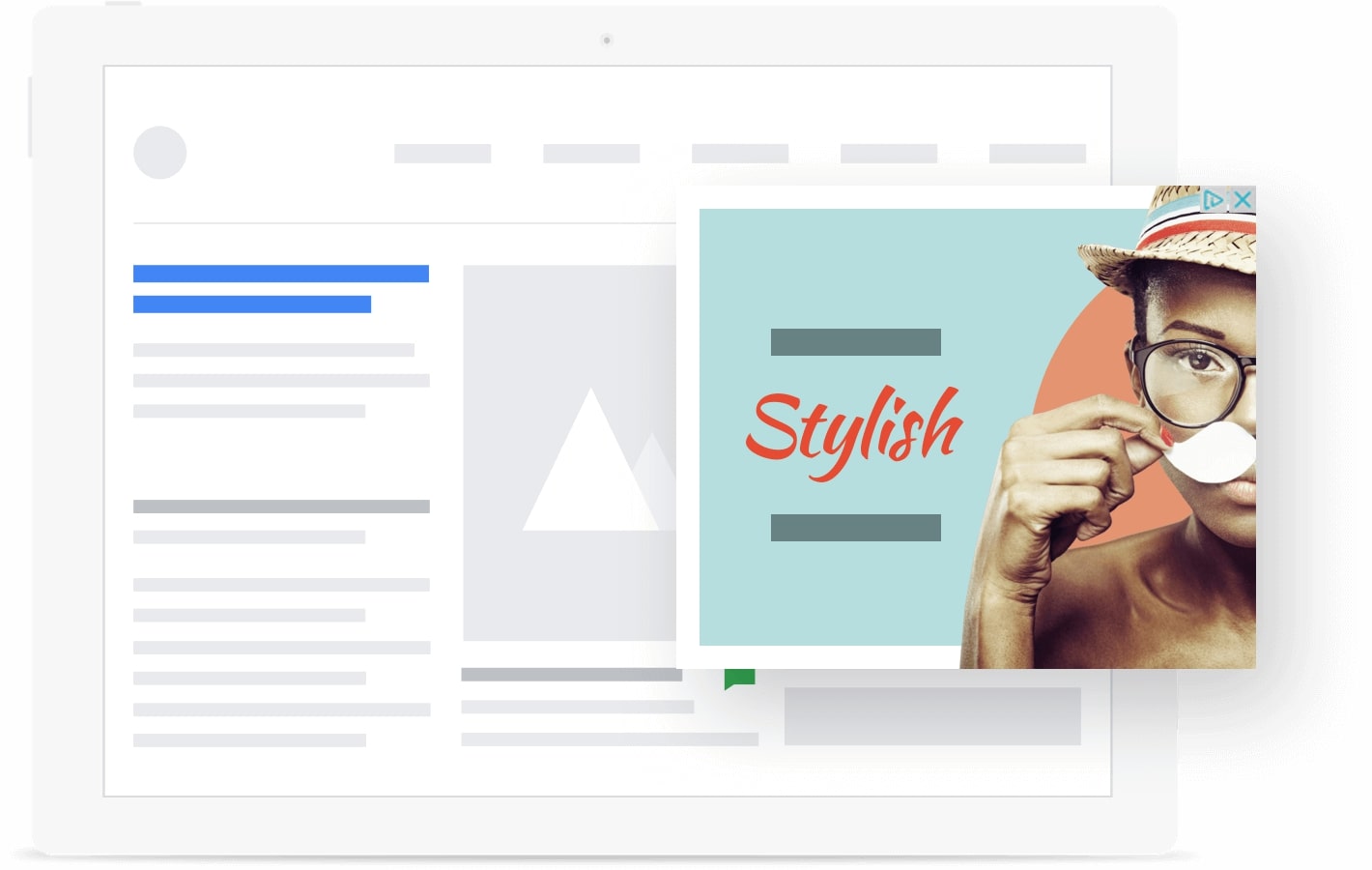 AdSense acts as an ad network, offering access to demand from advertisers and assisting you in setting up your ad inventory. AdSense is best for publishers aiming for more automation for their ad solutions and has a small yet dedicated ad management team. Publishers can earn ad revenue from their content on a cost-per-click (CPC) basis. Ads can be targeted to the website demographically, contextually, or an advertiser specified placement preference in their targeting choices. However, we can see a shift towards Google AdSense replacement amongst the publishers, an inclination towards Google AdSense alternatives. They are searching for better Google AdSense replacement or Google AdSense alternatives.

AdSense is for you if you need:

What is Google Ad Exchange?

The origin of Google Ad Exchange (AdX) lies in DoubleClick Ad Exchange, a company founded in 1996 as an ad server. It was later acquired by Google in 2008. However, the takeover was controversial as it raised red flags on Google’s dominant control over online advertising. Earlier, AdX and DoubleClick used to be two separate products. However, they rebranded in June 2018. Ad Exchange or AdX is Google’s premium ad monetization platform, better known as an open marketplace for exchanging impressions. Via Google AdX, publishers can sell their ad inventory to advertisers and agencies using real-time bidding technology. Prices are set in a real-time auction; it enables display ads and effectively allots ad space across the web. 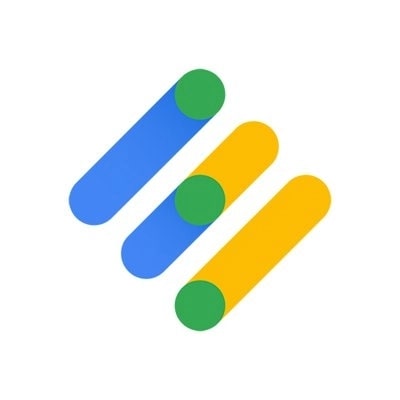 On one hand, sellers can make the most money for their ad space and get access to more advertisers while still controlling who can advertise on their site. On the other hand, buyers get access to numerous websites and ad space, plus they have more control over running their ads. Google Ad Exchange is designed to deliver publishers with high-traffic websites with more control, allowing them to optimize their ad setup.

AdX is a premium feature within Google Ad Manager; it is exclusive to those invited or who work with a Network Partner Manager, like AdSparc.

Ad Exchange (AdX) is for you if you need:

What’s better for the Publishers? AdSense or AdX?

Now let’s talk about the elephant in the room, “AdSense or AdX – Which one is more beneficial for the publisher?” “Is there any Google AdSense replacement or Google AdSense alternatives available?” Google AdExchange (AdX) and Google AdSense are both advertising services controlled by Google. They both allow publishers to earn money by running advertisements. However, the search for Google AdSense alternatives is on the rise. Publishers considering an upgrade from AdSense to Header Bidding with Ad Exchange will precisely want to know whether they will earn more or not. Merging Header Bidding with Ad Exchange (maybe Open Bidding too) is the optimum setup in most circumstances. However, that doesn’t mean that it is always a better choice than AdSense.

So, what’s the fuss about AdX vs AdSense? Header bidding or AdSense? Which platform is better for your ad inventory? The best reply for which network is better ultimately depends on the budget and competencies of a company.

In most markets, advertisers buy more than 70% of the display and video demand through the Google stack. As a publisher, it is therefore critical to fully optimize your Google demand. AdSense is a great entry product, but there are better options as your visitor numbers rise; here comes the Google AdX.

The Google Ad Exchange (AdX) was built to connect big brand advertisers and premium publishers in real-time. It has grown to be the leading global Real-Time Bidding marketplace for premium advertisers. AdX is the center of Real-Time bidding and offers advertisers a rich portfolio of features. The AdX demand offers higher eCPMs and better-quality ads to publishers. Publishers can expect to earn up to 30% more revenue via AdX compared to AdSense!

Why do you need AdX?

The key reasons to add AdX is to increase your revenue and improve the quality of the ads over AdSense.

How To Get AdX?

Unless you have over 5 million unique visitors per month, you won’t be able to sign up to AdX directly. Google uses trusted partners to allow access to AdX by sites that don’t meet the volume requirements. AdSparc is one of those trusted partners and can unlock the Google AdX demand for your site.

AdSparc will manage the Google application process for you and, in the process, provide guidance and direction. Once you will be live, AdSparc will continuously optimize the AdX demand to maximize your return. As an AdSparc client, you can benefit from many other AdSparc products to further boost your revenue.

If you consider monetizing your website with Google Publisher Tools and have good traffic, but you are still wondering which way to go – get in touch with us. AdSparc’s knowledge, programmatic understanding, experience, and advanced technology can connect you not only to Google Adx but also to other SSPs to maximize your ad revenue. Let’s get started! 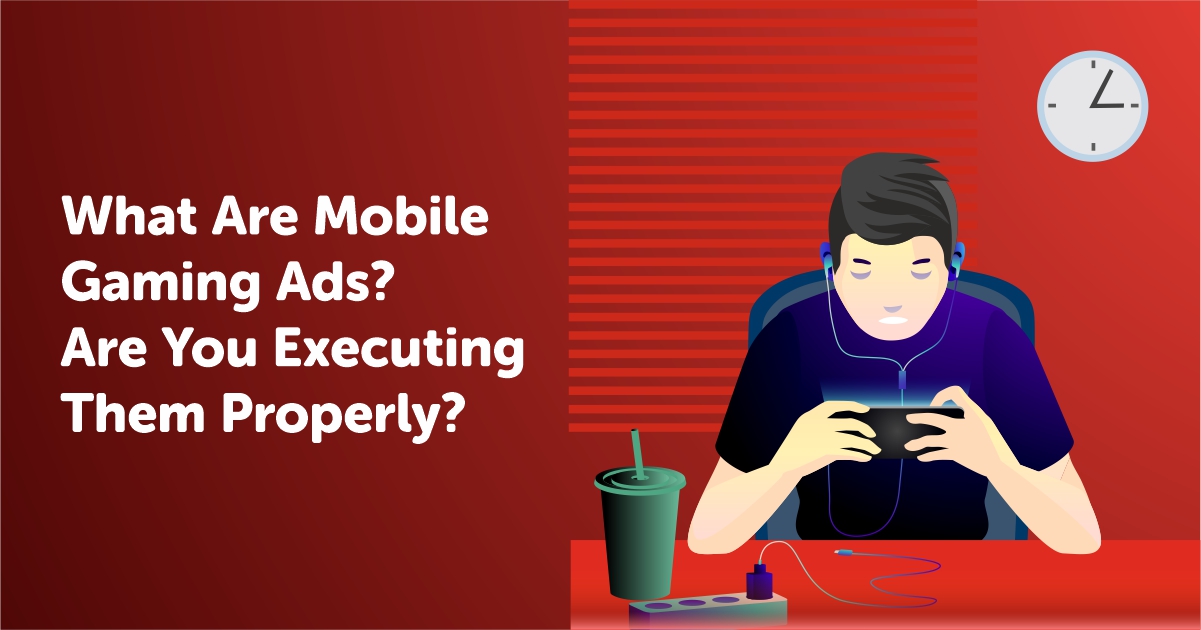 What Are Ads in Mobile Gaming Industry? Are You Executing Them Properly? 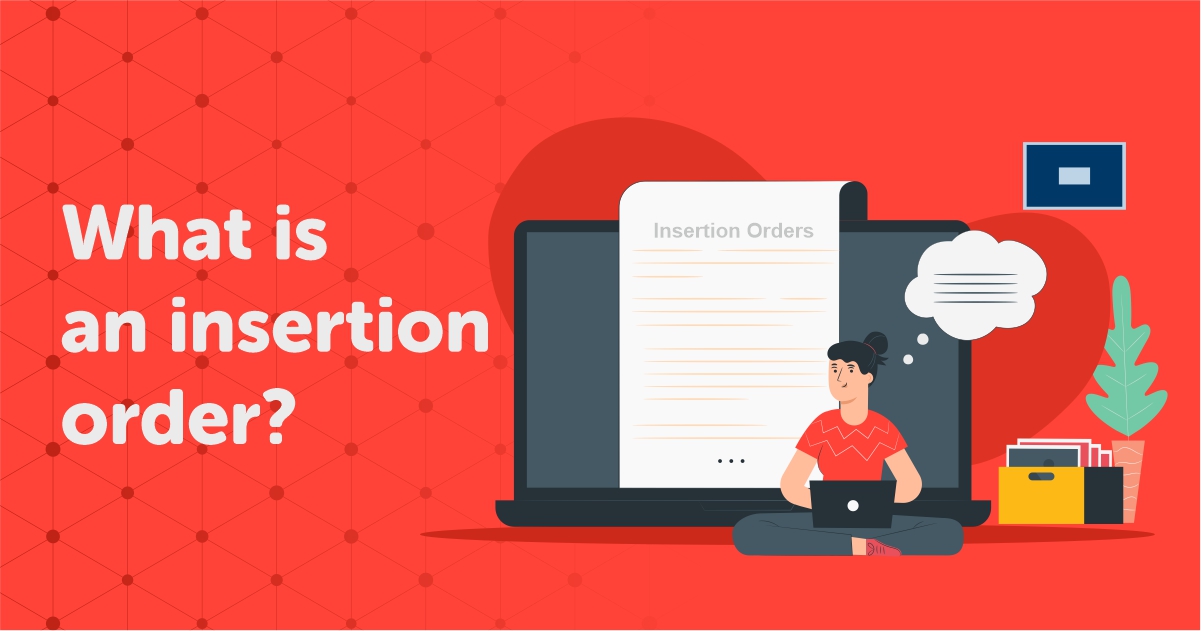 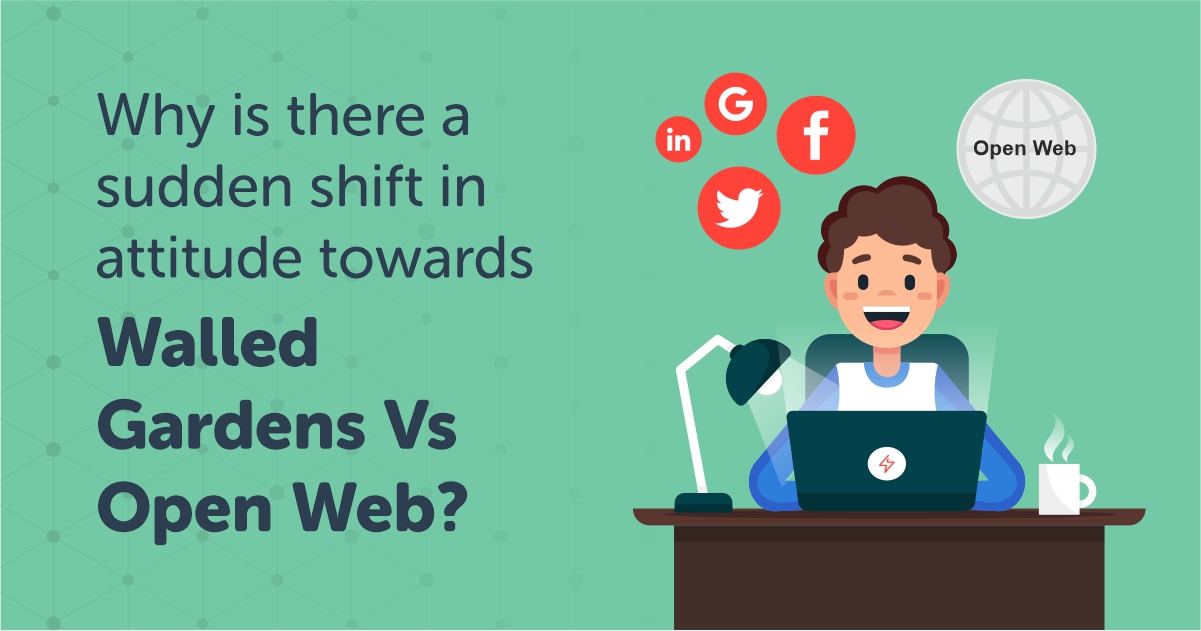